During Xianfeng period of Qing Dynasty (1851-1861), the peasant uprising of Taiping Heavenly Kingdom was carried out rapidly, and its capital was established in Nanjing, Jiangsu Province. At this moment, Yunnan copper, which the Qing government relied on for casting money, could not be transported into Beijing because of the blocked road. 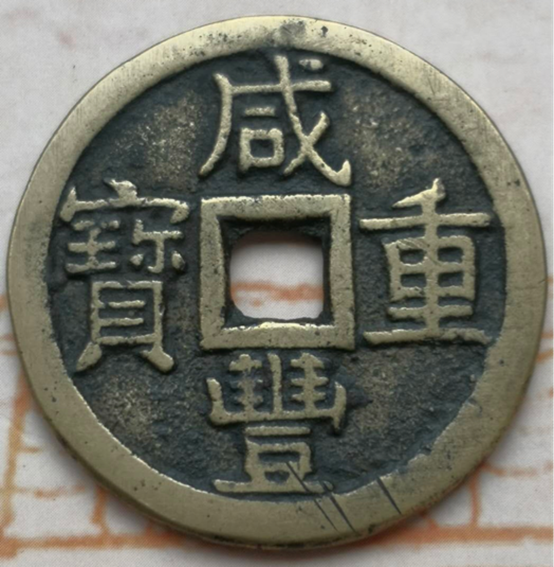 On the one hand, it is urgent to suppress the uprising, and on the other hand, the shortage of raw materials for casting money caused severe financial difficulties for the Qing government, which eventually forced the Qing government to issue paper money and change it to make big money to compensate for the financial deficit. The money cast by Xianfeng Chaobao Gong Bureau has five denominations: "Dang Bai", "Dang Bai", "Dang San", "Dang Wu" and "Dang Qian".

The flat money was cast in Xianfeng period (1851-1861). Due to political corruption and economic difficulties, it was not long before it was cast, and it was hit by all kinds of heavy treasures and ingots, and Tongbao money was seriously devalued, so the production was simple and the shape was mixed; The coins cast by the 27 national bureaus are different in copper quality, size and characters, among which there are many rough ones and few excellent ones. Generally, the diameter is 2.2~2.6cm, and the weight is 2.4~4.2g, in which large sample money is rare, but more is privately cast poor quality thin money, during which the goose eye money weighs less than 1 g. The names of various treasure bureaus are recited in Manchu, which are common in about 20 bureaus, especially those cast by Baotai Bureau, Aksu Bureau and Baogong Bureau. There are still several kinds of carved mother of Xianfeng Tongbao handed down from ancient times, which are extremely precious. 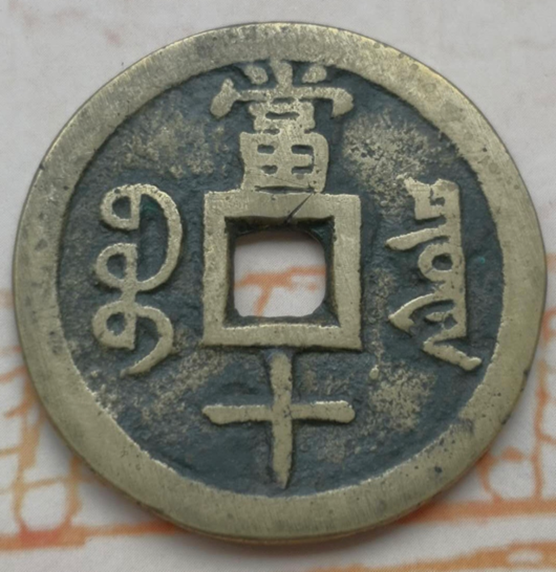 Since the Qing Dynasty, there have been many wars, and the ten ancient coins of Xianfeng Chongbaodang have suffered serious losses. Up to now, the number has been extremely limited. What's more, if you can collect a sample coin, it will definitely be a great celebration for collectors who have a special liking for Xianfeng's treasures. When collecting ancient coins, we should have a detailed understanding of their appearance, because the price will vary greatly with different appearance. For example, the collection value of iron coins with poor appearance will be greatly reduced. However, Xianfeng Heavy Treasure has been baptized for many years, and its appearance may be affected, so it is very difficult to collect high-quality Xianfeng Heavy Treasure. Perhaps because of this reason, some Xianfeng heavy treasure coins are now priceless, and even only one or two Xianfeng heavy treasure coins can be exchanged for a house in the urban area.

This Xianfeng Dang Shi Bao, with a weight of 18.32 grams and a diameter of 3.9CM, is cast with regular script on the front and read directly from top to bottom, right to left. The word "Dang Shi" in Chinese is written on the back of money, and the name of Baogong Bureau is written in Manchu on the left and right. [In the second year of Kangxi in Qing Dynasty (1663), Shaanxi Province was divided into provinces, with Shaanxi in the east and Gansu in the west. Shaanxi Right Bureau moved to Gongchang Mansion (now Longxi County, Gansu Province) to govern Gansu, and in the seventh year of Kangxi, it was changed to Gansu Bureau and moved to Lanzhou Mansion (now Lanzhou City, Gansu Province)] This Xianfeng Heavy Treasure version is relatively high-grade, with clear and deep handwriting, excellent copper, fine casting and thick and warm coating

The collection value of ancient coins is determined by the amount of existence, cultural value and casting technology. A rare treasure, an ancient treasure, "Xianfeng Heavy Treasure as Ten". Although the collection has been baptized by relentless years, it is still well preserved today. The famous ancient treasure "Xianfeng Dang Shi" is due to its historicity and rarity. This rose coin is elegant in layout design and well carved, but it has a small amount of casting, so it is extremely rare in the world and has high historical and academic value.

The collection is now on sale in the art online mall platform. According to the treasure holder, this ancient coin was handed down by ancestors. It has been appraised by experts and teachers, and it is a masterpiece. We learned that he had this rare treasure and invited him to take part in it. Now the holder of the treasure has difficulty in capital turnover. We are willing to entrust this ancient coin to our company to find a buyer through network media on its behalf. If you are interested in this collection, you can call the enterprise contact number: 400 686 3616 for discussion.