In the history of Chinese currency, from the late Ming Dynasty to the Qing Dynasty and the Republic of China, that is, from the end of the sixteenth century to the beginning of the twentieth century, with the ever-expanding Sino-foreign trade, foreign currencies represented by silver dollar flocked to China, from circulating in the southeast corner to sweeping across China, from the means of payment in Sino-foreign trade to the mainstream form of Chinese currency, which brought unprecedented impact to Chinese society in the late Ming and early Qing Dynasties. It was not until the Guangxu period of Qing Dynasty that various silver dollars were cast to compete with it, but they could not resist foreign silver after all. 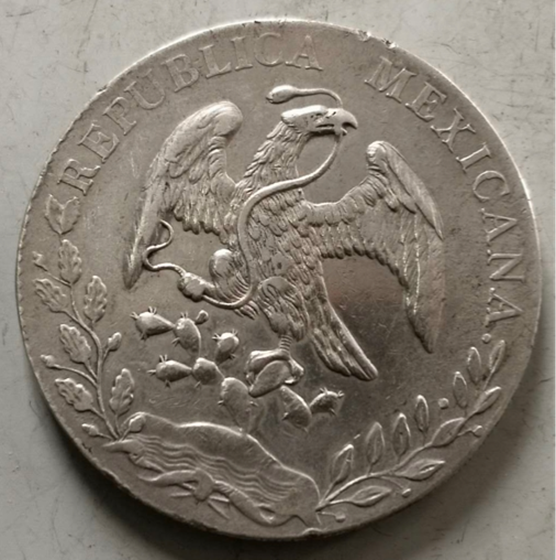 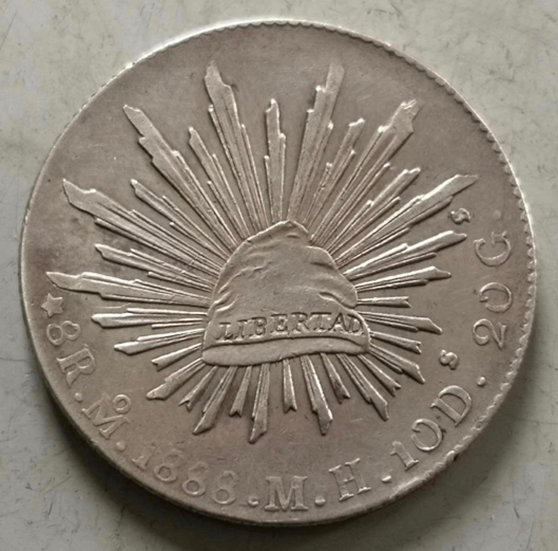 Yingyang, Mexico, was in circulation from 1824 to 1905. After Mexico's independence, with its rich silver reserves and silver coin making technology, it quickly standardized the manufacture of Yingyang and put it on the world market. China is its biggest dumping country, because Spain's double-column "Benyang" is cut off, China has no silver coins, and other foreign silver oceans are messy. All these give Yingyang an opportunity to intervene. After several rounds of contests, Yingyang is because of its In recent years, Yingyang has attracted much attention because of its edition caused by many factors, such as foundry, production year number, etc., and has become an obsession of collectors at home and abroad.

On the front of this Mexican eagle coin is a winged eagle with a long snake in its mouth (the tail of the snake is connected with the eagle's wing), standing on the cactus (national flower) on one leg, and writing "Republic of Mexico" in Spanish above the edge. There are 32 beams of different lengths radiated around the cap under the edge (representing 31 States and 1 federal district in China), and one of the three beams at the top of the free cap is shorter. There are 11 light columns on the lower edge of the free cap. The lower half of the edge is cast with the words 8R.Z.1888.J.S10D.20G .. On the back is a shining free soft hat, and the brim book says "LIBERIAD". Mexico has always maintained a long tradition of coinage, which has become an art. This coin is 3.8cm in diameter and weighs about 27.16g g. The appearance is intact and the outline of Qian Wen is clear. For coin collectors, this Mexican Eagle Ocean Coin has high historical value, artistic value and collection value.

The collection is now on sale in the art online mall platform. According to the treasure holder, this ancient coin was handed down by ancestors. It has been appraised by experts and teachers, and it is a masterpiece. We learned that he had this rare treasure and invited him to take part in it. Now the holder of the treasure has difficulty in capital turnover. We are willing to entrust this ancient coin to our company to find a buyer through network media on its behalf. If you are interested in this collection, you can call the enterprise contact number: 400 686 3616 for discussion.